This is your very first post. Click the Edit link to modify or delete it, or start a new post. If you like, use this post to tell readers why you started this blog and what you plan to do with it.

This is my piece for the Alyth Voice of November 2018. Unfortunately I missed the deadline and the newsletter had gone to press, so here it is on this new blog that I am trying to start, having fallen out of love with Blogger.

It has turned cold and a northerly wind is blowing a steady shower of leaves off the trees. As I walk towards the steading I tread over a carpet of the fallen: pale yellows of lime, varying hues for those other species, willow, oak, birch, sycamore, horse chestnut that lie waiting to be taken back into the earth; into the endless cycling of nutrients and regrowth that is essential to life on earth. There is no waste in nature.

The fallen leaves speak to us of withdrawal: their task is done and the parent trees, having resorbed the nitrogen and phosphorus from the leaves, are storing them in their twigs, ready to fuel the sprouting of the new shoots next spring. In the meantime I am heading for the old Dutch barn to see how many bags of trees have yet to be taken to the hill for planting.

This week has been tree planting week at Bamff. It began on Monday with a visit to Alba Trees in East Lothian, from whom we have bought the trees with which to stock our new woodland. I have always respected Alba Trees because they take trouble to source their native tree seeds from reliable sources, using reputable (even distinguished foresters such as Rick Worrell) to collect them. Never has this been so important since it became public knowledge that British nurserymen were sending local seed abroad for growing on and then receiving it back infected. That is what happened with ash die back, it seems. Not the first time such a disaster has happened. We remember the Dutch elm disease of the 1970s which eliminated the English elm as a feature of the landscape there, and a similar but not so complete destruction of the wych elm here. It resulted from an import of infected timber possibly from Canada. A much earlier pandemic caused a massive decline of elm in the Neolithic in which human activity, climate change and the scolytus beetle seem to have been implicated.

Anyhow, to return to the present: this new plantation at Bamff will consist of Scots pine, both sessile and pedunculate oak, birch (silver and hairy), hazel, rowan, juniper.

Tuesday saw the arrival of the trees. Michael Todd from Spittalfield brought his team of planters. There was a briefing from Paul Schofield of Galbraith’s, who had prepared and laminated a detailed map to show where the different species were to go. The planters loaded a pickup and six wheeler quad with transplants, and headed for the hill in a purposeful group. Most of them were from Slovakia.

Did I hear someone say: ’this doesn’t sound like an example of productive forestry’? This word ‘productive’, attached to the planting of monocultures of Sitka spruce, is a bug bear of mine. All woods are productive; massively so, whether the trees are grown specifically for timber or not. They give us oxygen, soil, are host to and interact with a myriad of organisms. Indeed, mature forest is a super organism, held together by mycorrhizal networks of extraordinary complexity. They moderate runoff and local climate. The volatile organic compounds they exhale have been shown to exercise a calming effect on people.

Forests are part of the nature that keeps us on a living planet. When he was President of the United States, Bill Clinton made the statement ‘It’s the economy, stupid!’ famous. He should have said ‘It’s the environment, stupid’ because without the environment there is no economy.

Having gone back to my beaversatbamff.blogspot blog I have been unable to download photos, which is trying and led me to wonder if I should not move over to WordPress. Why WordPress? I suppose that I have noticed some really nice blogs on WordPress and so thought that it would be time for a change.

First of all I wanted to post my short piece, written for the Alyth Voice, about Louise’s and my journey to Oregon for the ‘State of the Beaver 2017’ conference which took place from the 22nd to the 24th February.

A Letter from California.

They do say that San Francisco is inclined to rain, but nobody told me that Los Angeles would suffer a massive rainstorm while I was there. Instead of golden sun and blue skies the rain lashed down, tearing old palm fronds off their trees and casting them on the roads and sidewalks. The famous Hollywood sign was hidden in the mist and there was no view from the Griffith Observatory. Ten inches or so of rain fell in the storm of Friday, 17th February.

California is in the throes of a metereological turn around. For a good six years there had been unbroken drought and now there are floods. The US’s highest dam, the one at Oroville was in danger of overflowing and the massive outpouring of water through the spillways threatened to destroy these structures themselves. About 180,000 local people had to be evacuated from their houses in case the dam itself collapsed. An article in the current number of the ‘Scientific American’ reports that recommendations that the dam should be strengthened as a response to the changing climate were turned down in 2008.

Interstate 101 is the highway that takes you through much of the Central Valley of California. This lies between the coastal range and the Sierra Nevada to the East. The area amounts to some 18,000 square miles and is given over to intensive agriculture. We drove past vineyards and huge orchards, some of them almond orchards in flower. There were plantations of peaches and vast fields where rice would grow. Irrigation pipes were to be seen in many place, a curious counterpoint to the flooded fields in which those pipes lay. Single enormous fields stretched out of sight from the road as we drove by. The biggest fields in Strathmore were dwarfed in comparison.

The signs of the recent rains were present everywhere, but it was not until we drove through the northern end of the plain that we saw the extent of the flooding caused by the rainfall that has threatened the Oroville dam (and a couple of others) with apocalypse. By this time we had left Interstate 101 and were heading for Chico. I noticed a high rampart to our right and then saw a sign to Oroville. Wow! I thought. Passing so close to this enormous lake/reservoir with its threatened dam, was an unexpected brush with current headlines. We drove on and the rain continued to lash down. I noticed a huge flock of snow geese resting in a flooded field. On the other side of the road some Canada geese were grazing.

Looking at maps later I discovered that the rampart we had passed by was the boundary of the Thermalito Afterbay, which is part of the Oroville-Thermalito complex of reservoirs and structures. The main high dam lies further to the east. It was completed in 1968 and created a lake that flooded the Feather River and various others in the catchment to store water for hydroelectricity, irrigation, flood control, etc.

In my excitement about the Oroville dam I nearly forgot to mention our visit to the Muir Woods National Monument. This is a small reserve of about 500 acres a little to the North of the Golden Gate Bridge, and one of the last areas of old growth coastal redwoods. It was declared a reserve by President Theodore Roosevelt in 1908 in honour of John Muir who fought so hard throughout his life for the protection of wilderness and for the establishment of a system of national parks in a country that was being assailed by the demands of modern society and the growth economy. The great trees are an astonishing sight and presence, for which nothing can prepare the visitor. The old trees in this wood are at least 1,000 years old.

Rolling back in my memories of this journey from Los Angeles to Oregon I must mention Monterey, the site of John Steinbeck’s ‘Cannery Row’, where we stayed a night. The canneries in Monterey processed fish, mainly sardines, of which there was once tremendous abundance, but the fishery was grossly over exploited and eventually collapsed by the late 1940s, leaving a legacy of pollution in the Bay and collapsed economy on land. Steinbeck’s friend, the marine biologist Ed Ricketts, and Julia Platts, the mayor of the town, campaigned for the restoration of the ecology of the marine environment with eventual success. Ed Ricketts is the ‘Doc’ of Steinbeck’s novel. Dr. Ricketts founded the world famous aquarium in Monterey, a major attraction to visitors.

Now we are in Canyonville, Oregon after driving out of California, over the mountains, ready to attend the ‘State of the Beaver’ conference for 2017.

Louise standing by a redwood at Big Sur. 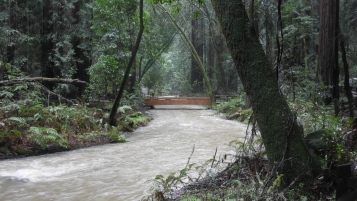 The Muir Woods National Monument is just outside San Francisco, beyond the Golden Gate Bridge. It owes its survival to the difficulty of getting at the wood, which lies at the bottom of a canyon. President Teddy Roosevelt the land a national monument in 1908 after a local congressman, William Kent, had bought it to save it.

Note the full stream and the dead wood that has been left lying in it.

There, I think that is enough to start with.

This is a text widget. The Text Widget allows you to add text or HTML to your sidebar. You can use a text widget to display text, links, images, HTML, or a combination of these. Edit them in the Widget section of the Customizer.
Loading Comments...